It's Hip to Be Square 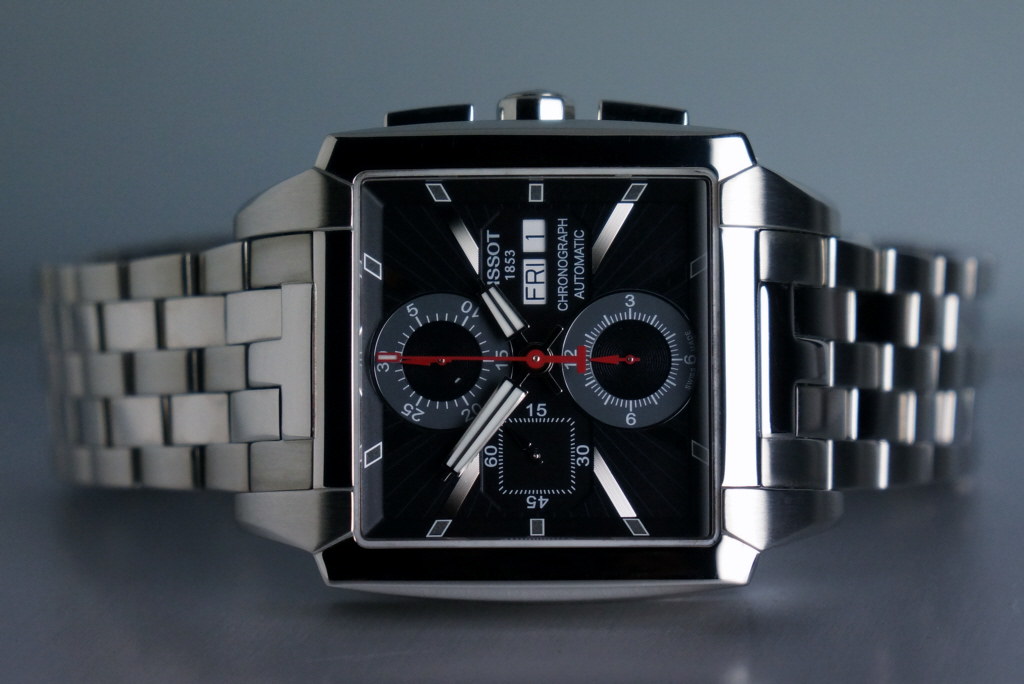 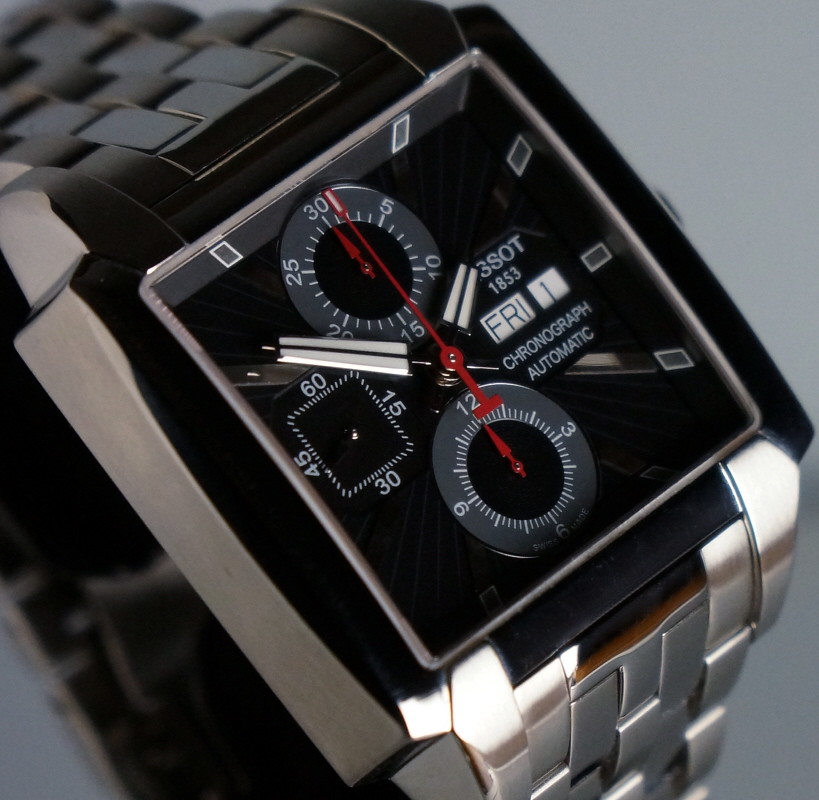 Tissot produced their T-Trend Quadrato collection before the original August 2012 broadcast of Breaking Bad's season 5 episode 4 that featured the Tag Heuer Monaco and popularized square watches, particularly chronographs. While I don't have production dates, examples of the Quadrato automatic chronograph can be found on the Internet dating back to 2010. There's no doubt about its distant resemblance to the square (Tag) Heuer Monaco, although the Heuer is a two-eye with the minute and hour accumulators at the 3 and 9, plus the original Steve McQueen wore was a partial destro with the crown on the left and pushers on the right. (The Breaking Bad Monaco is a caliber 12 with the crown on the right.) While the Tissot Quadrato auto chrono has some resemblance, its dial graphics and sub-dial layout are unique enough to stand on their own. I don't know when the Quadrato collection was discontinued, but it was at least a year ago, if not two. NOS can still be found in the Internet storefronts of reputable watch dealers, although the scarcity of new ones is increasing.

The dial has considerable visual depth in layers. Four brushed silver bands extend the hour indices across the dial from 1-->7, 2-->8, 4-->10 and 5-->11. The minutes and hours totalizer sub-dials have gray rings with their index markings are overlaid on top of these bands, along with the seconds sub-dial and day/date window frame. Even the hour and minute hands have visual depth. A steeply beveled chapter ring enhances the visual effect. 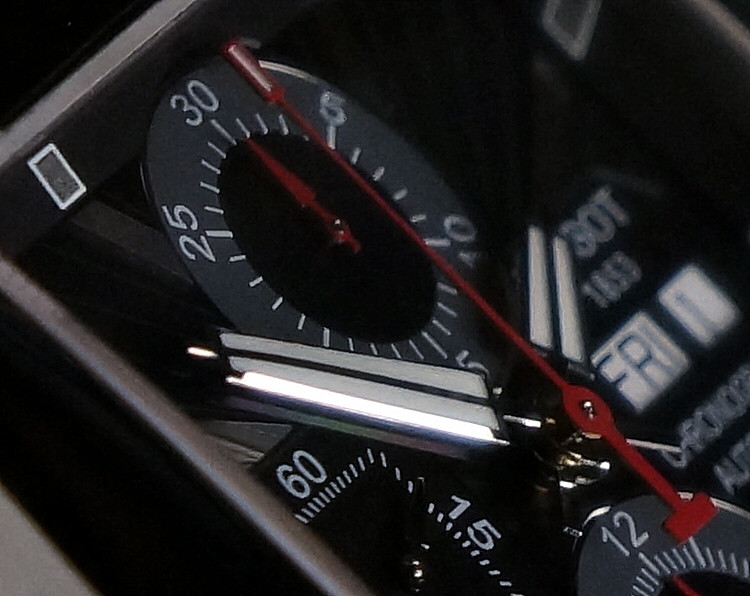 A steeply beveled chapter ring enhances the visual effect, setting the dial well below the crystal giving the dial layers and hands plenty of head room. The gray totalizer rings with white indices enhance legibility. Not generally noticed immediately, all three hands for the chronograph complication are red, also enhancing legibility and distinguishing them from the timekeeping hands. The curved sapphire crystal prevents it from being a glaring mirror, and is virtually scratch proof. The dial is readily visible through it in all types of light.

For its size, this is a thick watch at 15.5mm. It's driven by the thickness of the ETA 7750, which is one of the thicker chronograph movements, combined with the layered dial and curved crystal. You can see how the back is extended downward with a bevel to mitigate this visually. Nevertheless, it will stand proud from the wrist some. At 217 grams, it's not a heavyweight, but neither is it a lightweight, and it's heavier than many watches in its size class. Part of it is the square case and crystal, and part of it is ETA 7750, which is also heavier. If you're not accustomed to a thicker watch or haven't worn one for a while, and you will notice its height when wearing it, a phenomenon common to nearly all ETA 7750 powered chronographs. In addition to the subtle "T" in the bracelet end links, the octagonal crown is also signed. The one small nit I have with the Quadrato is the octagonal crown. It fits the style very well, but it is a little more difficult to grip between the pushers when trying to manually wind the watch, requiring a little more time and effort compared to many other watches as it cannot be rapidly turned between the thumb and forefinger. Day/date quick-set and time setting are fine and without any problem as the crown is pulled out some, it's only when trying to wind it. 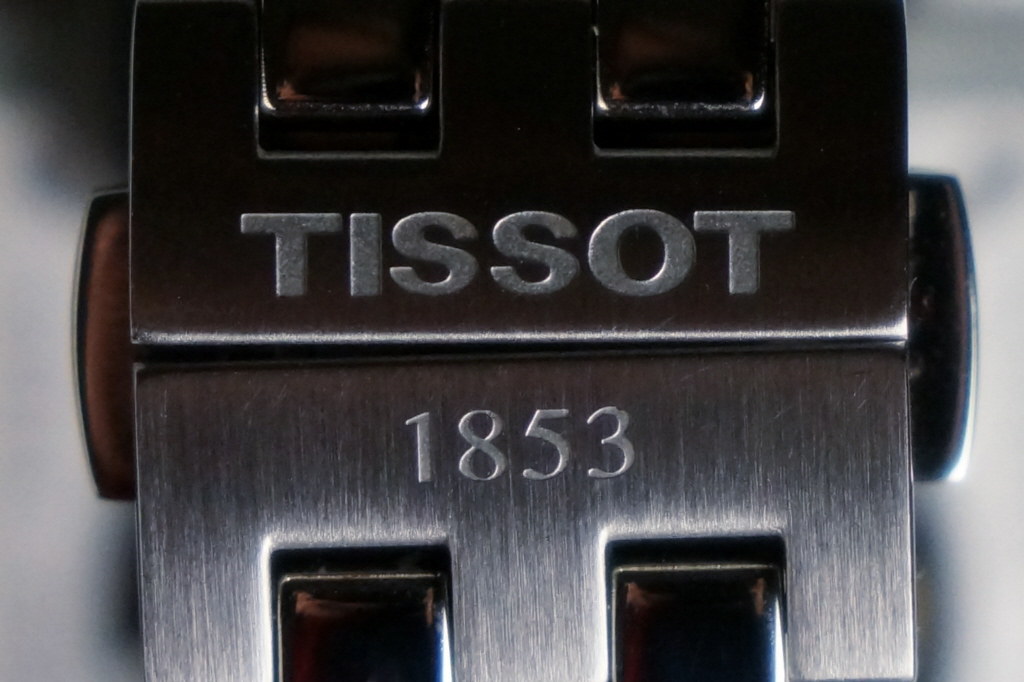 The brushed finish bracelet has solid machined links, including the end links that attach to the watch. Clasp is a double pushbutton butterfly deployant, with signed end links attached to it. It includes two half links for fine tuning the length to fit the wrist more precisely, a requirement when this kind of clasp is combined with links having any appreciable length. Closure is firm and solid. I've never worried about it springing open on me. Note that proper bracelet sizing will not have the watch tight on the wrist. It's hard on the clasp and the springbars that attach the bracelet to the watch head. Too tight can ultimately lead to a springbar failure even though they're quite surprisingly very robust. It should have a very slight looseness. If you open and close your fist completely a few times and feel it binding on your wrist, it's too tight. If it rides up onto the back of your hand, it's too loose. 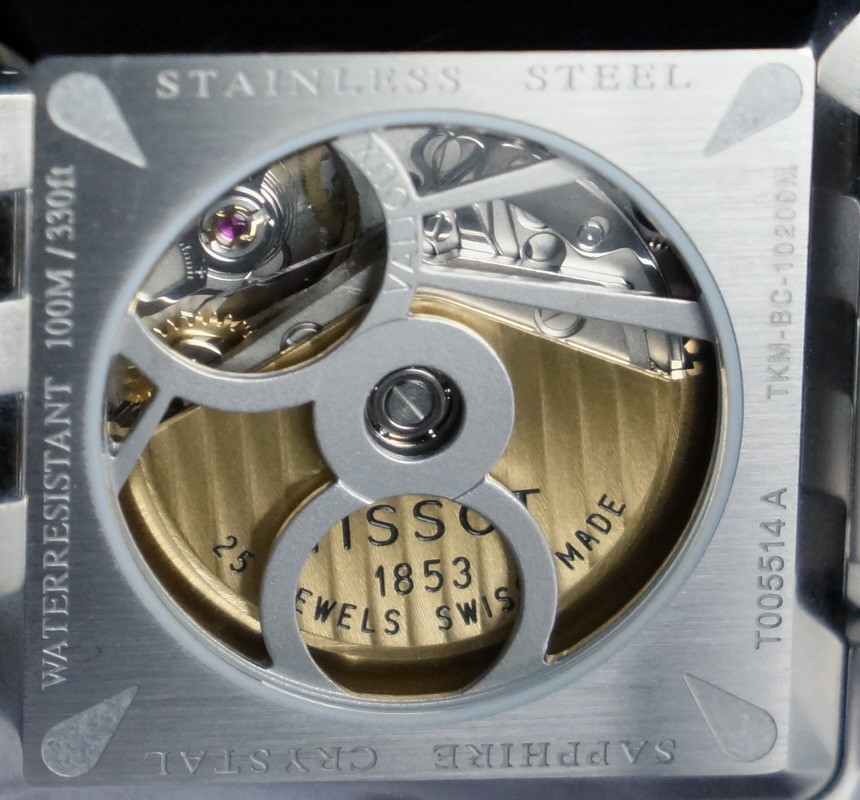 Tissot put an interesting display window on the back. It is reminiscent of an old Victorian era window, with rays emanating from the semicircle positioned over the balance wheel, as one might expect from a sun. The smooth finished movement has a signed, gilt rotor with Geneva stripes. The back appears to be a form of snap on, which isn't surprising for a square back, the alternative being multiple screws. Even though the back doesn't screw down, nor do the crown or pushers, it still has a respectable 100m water resistance. I wouldn't swim, hot tub or shower with it, but you can be confident that it will survive a heavy rain and everyday encounters with hand washing without worrying.

Numerous reviews of chronographs containing the ETA 7750 mention "rotor wobble." It's not really a wobble. The rotor on most current automatic watch movements will wind the watch in both directions. Originally, the first auto-wind mechanisms in the mid-1920's could not make a complete rotation. There were bumpers to prevent it. These are referred to as "bumper wind" movements by collectors now, and one could feel the rotor hitting the bumpers, at least occasionally. The auto-wind mechanisms were improved in the 1930's to allow full 360 rotation eliminating the bumpers, but they only wound the watch in one direction and freewheeled in the other direction. Eventually several different types of mechanisms were designed to allow winding in both directions. The most elegant and simplest of these was created by Seiko, called the "magic lever." While the huge majority are bi-directional winding, there are a number of movements still made that only wind in one direction. The ETA 7750 is one of them. Other notable uni-directional movements include the Miyota 8000 family, the new Miyota 9000 family (which surprised me), and the ETA 2001-1, a reduced size movement based on the ETA 2892A2 design. A characteristic of the unidirectional wind is freewheeling in the other direction. Occasionally, rapid or sudden wrist motion will set the rotor moving in the non-winding direction with more energy than normal, and without any winding resistance it will freewheel rapidly. While it doesn't cause any harm as the rotor arbor and bearings are designed for it, one can hear and sometimes feel this when it occurs. This is the "wobble" that isn't a wobble, but rotor freewheeling. 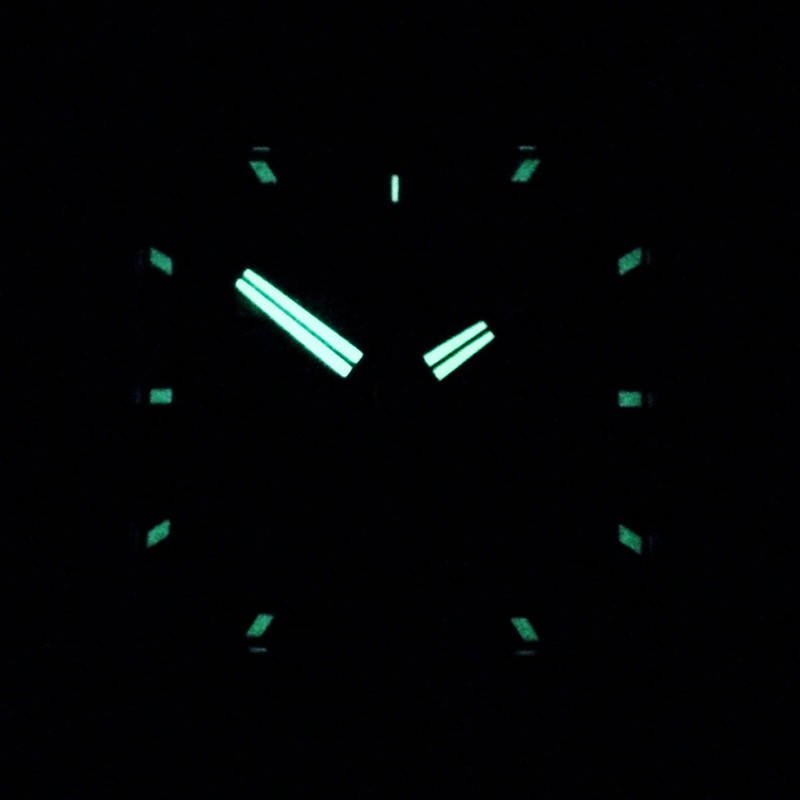 The lume is surprisingly bright and bold, especially on the main hands, given that it's neither a tool nor a sports watch. That was a pleasant surprise. The other surprise was the small rectangular strip of lume on the chronograph central seconds hand. I wouldn't expect lume on the small timekeeping sub-seconds hand as it wouldn't be very legible at arm's length. I came to the conclusion the chronograph central seconds lume is to at least let you know the chronograph is still running and measuring elapsed time in dim light or darkness. The ETA 7750 hour totalizer can accumulate up to 12 hours. It's entirely possible someone might be timing a very long event starting in daylight that continues into the night. 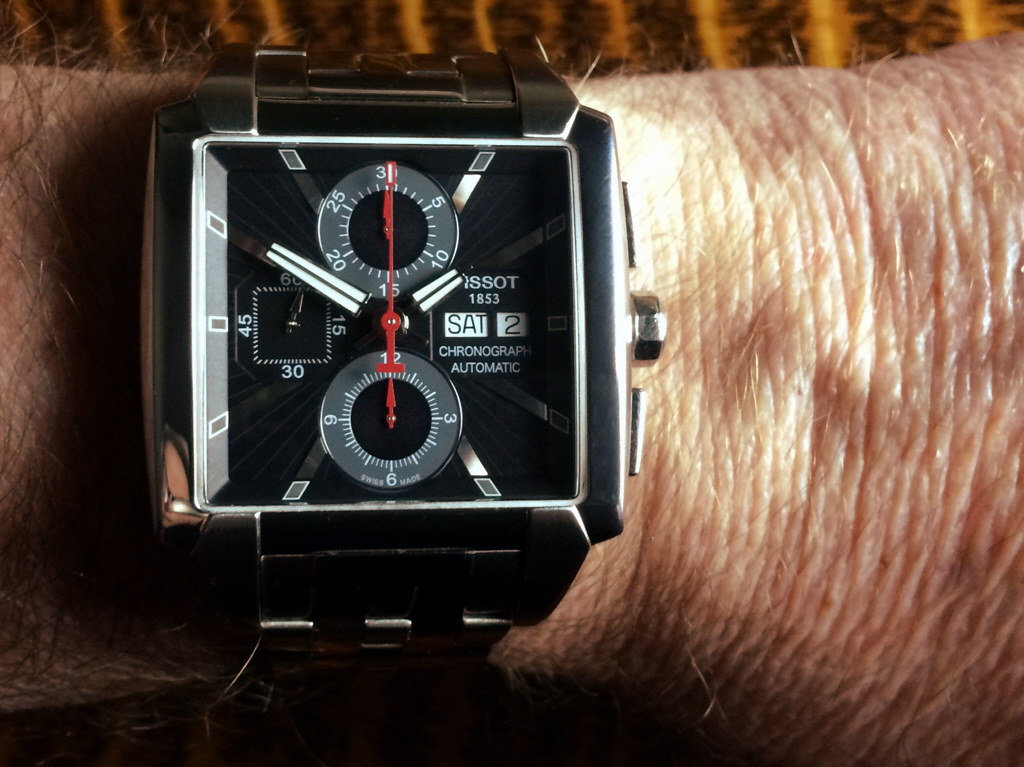 Overall, the Tissot T-Trend Quadrato auto chronograph is a unique one in a world of overwhelmingly round dial chronographs. It's very solid and well built with a robust feel that gives confidence in its durability. It's definitely not fragile. While maintaining a bold and edgier Tissot style, it doesn't have a tool or sports watch appearance, which allows it to wear well with semi-formal social and business attire (i.e. coat and tie).


Eat your heart out, Walter White. I don't need a Monaco.
I've got a Quadrato!

Note:
I have no affiliation, association or financial interest with Tissot, its parent The Swatch Group, or any of their distributors or dealers.
- January 31, 2016