Celestial Harmony from the Far East 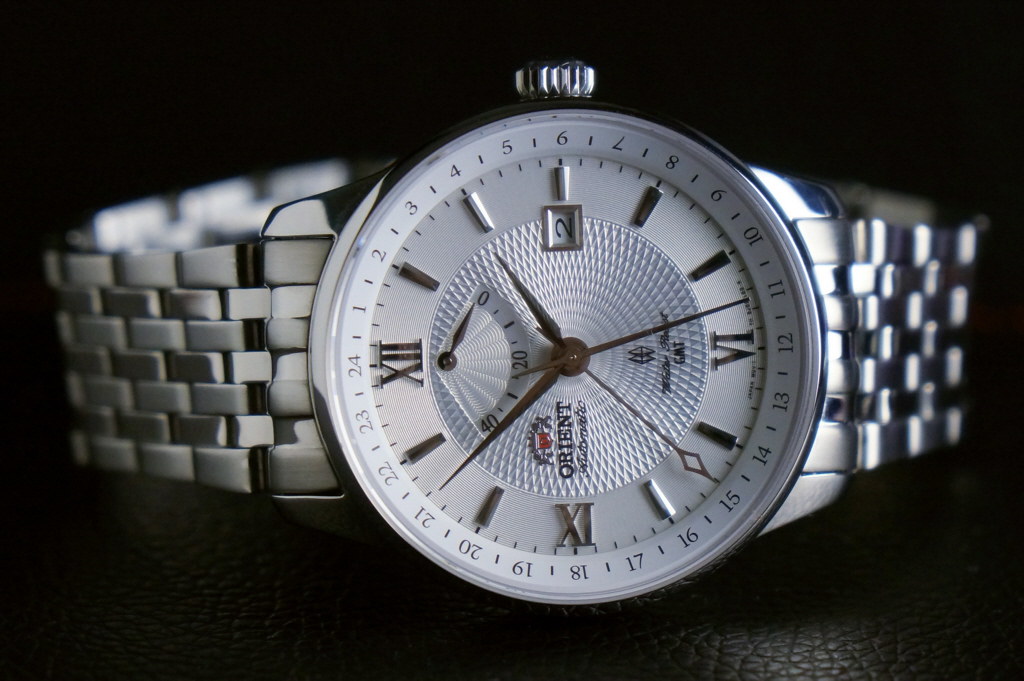 Orient Watch Company was evolved out of Yoshida Watch Shop, a wholesale pocket watch dealer that opened in 1901, selling imported pocket watches. Yoshida began making gold watch cases in 1912, and expanded again into making gauges and table clocks under the name Toyo Tokei Manufacturing in 1920. They started making wrist watches in 1934. The economic aftermath of WWII resulted in Toyo Tokei going under and closing in 1949. It was reincarnated as Tama Keiki in 1950 using the former Toyo Tokei factory in Hino. A year later in 1951, the name was changed to Orient Watch Company, Ltd., and the first Orient Star was introduced, a tier above the standard Orient. The Royal Orient flagship line was introduced in 1960. Seiko-Epson (TYO symbol: EPSON) bought an interest in Orient in 2001. Epson gradually bought out the private shares held by family members and other long-time owners, eventually owning it outright in 2009.

It’s important to note that Seiko does not own Orient, Seiko-Epson, aka “Epson,” (TYO symbol: EPSON) a very large holding corporation owns Orient Watch Company, Ltd. Seiko Holdings Group, a different very large holding corporation (TYO symbol: SEIKO), owns Seiko Watch Corporation. The two watch companies are entirely independent, with no common management up through and including their respective corporate boards of directors. Epson and Seiko have their own, different, public stock traded separately on the Tokyo Stock Exchange. Seiko “ownership” of Orient is frequently claimed and parroted all over the Internet, and it’s completely incorrect. The only connection between the two corporations: Suwa Seikosha started a subsidiary, Shinshu Seiki Co, to build precision parts for Seiko. Seiko needed an electronic printer for their timers at 1964 Tokyo Summer Olympics, and Shinshu Seiki made them for Seiko. Ultimately electronic printer modules became their core business culminating in EP-101, an electronic printer. Its successor, EP-Son, the son of EP, was concatenated into EPSON which became the subsidiary’s name in 1982. Suwa Seikosha and its subsidiary Epson merged in 1987 to form Seiko-Epson. There is substantial stock ownership in both corporations by members of the Hattori family, descendants of Seiko’s original founders, and various subsidiaries of each do business with each other.


The Constellation has a highly polished case in a standard round shape with a zero width bezel. The AR coated sapphire crystal covers the entire top, consuming 37mm of the 40mm case diameter. Lugs are also a standard shape flowing out from the case sides with gentle curves. The sides are slightly beveled which provides a softer appearance, avoiding a harsher cylinder shape straight vertical sides would have. Back is screw down with a full mineral glass display window that allows a complete view of the movement. The case, lugs and bracelet are understated, which allows the dial to dominate. 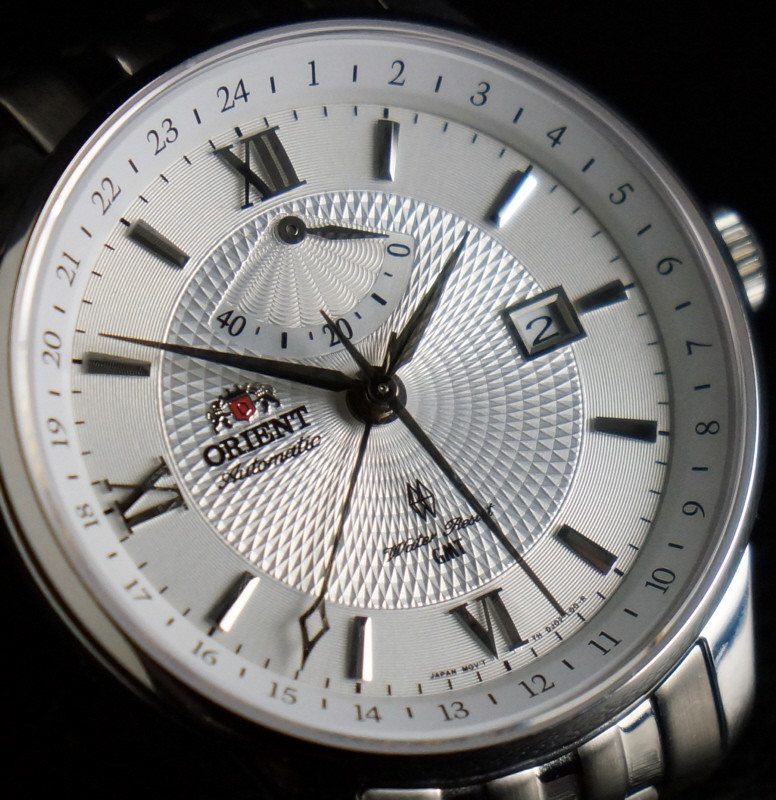 This Orient appears larger visually than its dimensions due to its zero width bezel, allowing a dial only 3mm smaller than the watch’s outer diameter. Dial color is a metallic slightly off-white, a little whiter than eggshell but not as stark white as a porcelain dial. Chapter ring contains the 24-hour markers with Arabics for the hours and tick marks at the half-hours. The main hour indices consist of 6-9-12 Romans with batons for the remaining hours. These applied on an outer ring with a texture of fine concentric circles. Small minute tick marks are at the outer edge between the hour markers. Inside this is a guilloche sunflower pattern covering the remaining inner part of the dial. Main hour and minute hands are narrow dauphine style with fine tips. Seconds hand is a fine narrow pointer. The 24-hour hand has a diamond shaped tip that easily differentiates it from the other hand. Highly polished silver, they’re readily visible against the dial. One important note is the lack of lume as this could be a deal breaker with some. There is none on the dial or the hands. Personally I don’t necessarily expect lume on a dress watch, which this clearly is.

The seven link wide bracelet has a nice combination of alternating fine brush and polished links, and it’s very flexible. The butterfly clasp is well hidden when closed giving a nearly unbroken continuous appearance. The links aren’t that long, which eliminates the need for half-links. Removable links are fastened together with standard “split pins” and the links have arrows on the underside showing the direction for removal (insert in opposite direction). 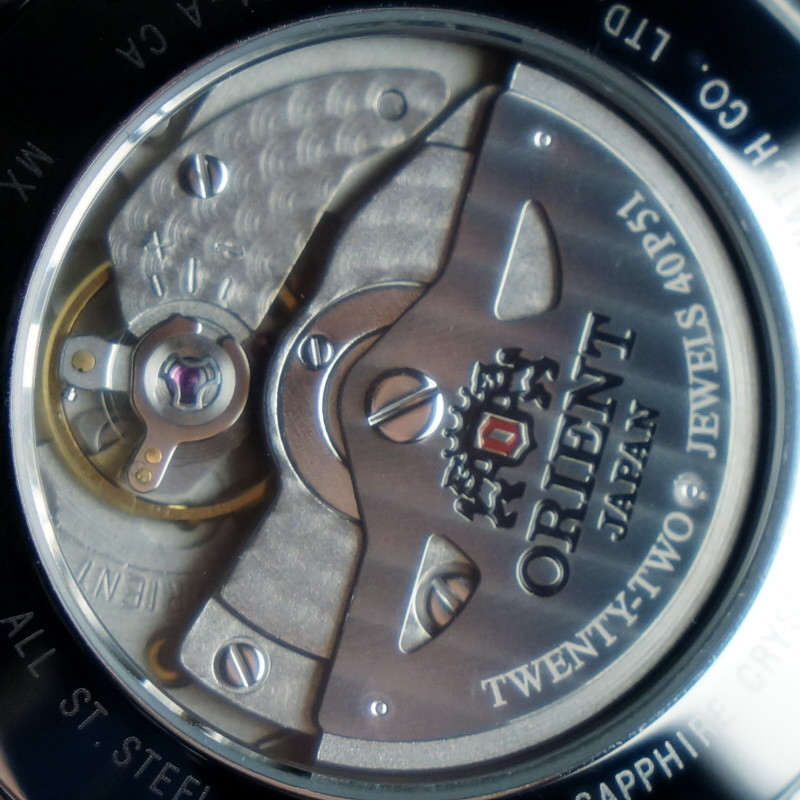 Standout features are the Constellation’s spectacular guilloche dial and a true GMT auto movement with hand-wind and hacking underneath it. Add to it a sapphire crystal and a comfortable solid link bracelet (with SEL), and you have a real winner. This is an Orient Star quality watch with an Orient logo on the dial, and it’s at the top end of that tier. Why it’s not an Orient Star puzzles me some, but the Star line has two GMTs that I’m aware of using the same movement.

The Orient Constellation’s contemporary size, design elements and top end materials combine harmoniously to create a true GMT dress watch that is a sleeper at the top of the standard Orient line. 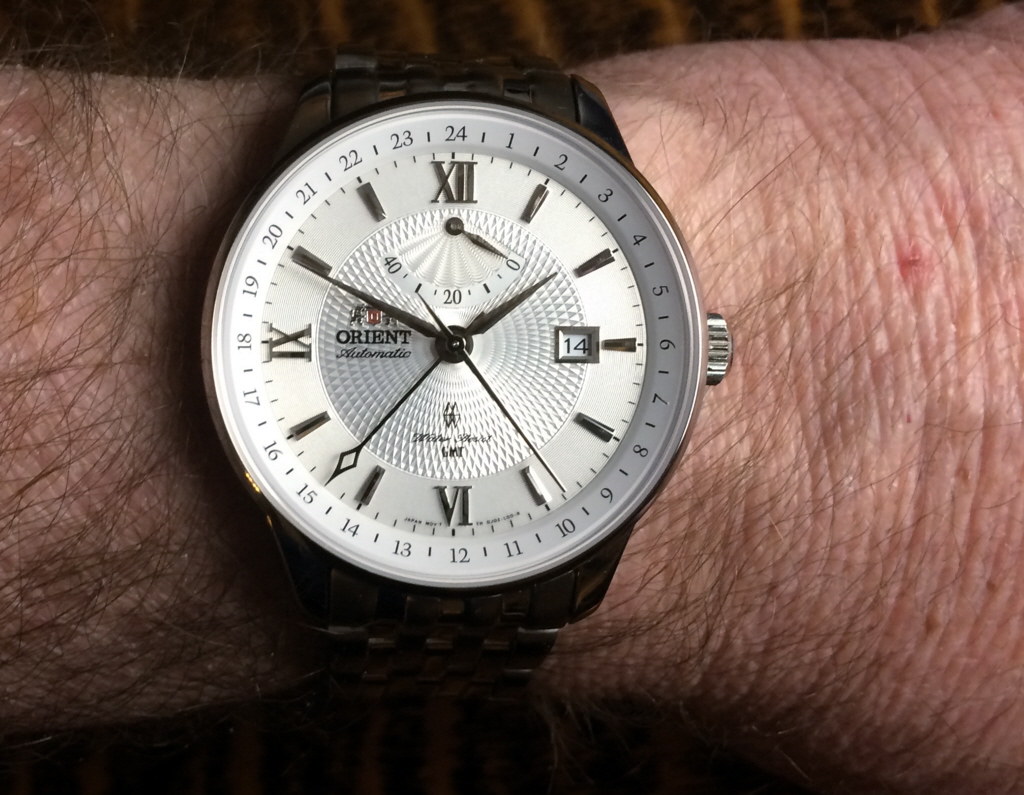 Orient ignored North America and its potential market for many decades, focusing on marketing domestically and with its lower lines elsewhere in Asia, with some presence in Western Europe. Their main products have been and continue to be mechanical with in-house movements. They have introduced some quartz models, but in small numbers compared to the rest of their collections. North Americans looking for Orient watches had to use Japan dealers directly, Rakuten Global, gray market storefronts and eBay, all via the Internet. There is a small official presence in North America now with one Internet based authorized distributor/dealer, but the many use the other sources. Orient now has four basic tiers:


Note:
I have no affiliation, association or financial interest with Orient Watch Company, its parent Epson, or any of their other subsidiaries, distributors or dealers.
- January 31, 2016