Good Things Can Come in a Small Package 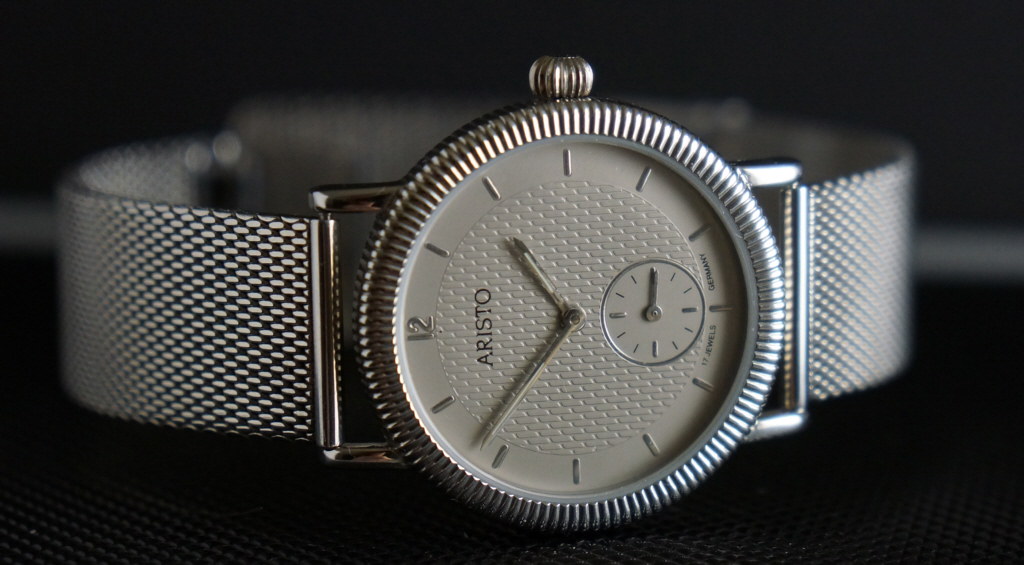 From the manufacturing year, this is obviously not a new watch and I've owned it for several years. It was found languishing as "new old stock" in the original box with tags a few years ago in the Internet store-front of a German watch dealer. I had been very patiently searching for a good watch with an ETA 7001 inside at an attractive price for several years. What I had been finding was either decidedly not my style or was priced higher than I wanted to spend. This Bauhaus style filled the bill exactly.

Aristo is a German company in Pforzheim, one of several traditional German watchmaking regions. Founded in 1907, they're joined at the hip now with Vollmer, having merged under the same ownership and management. Vollmer, founded in 1922, is a maker of upmarket metal watch bands, also located in Pforzheim. The U.S. Vollmer distributor sells watches under that branding as well (very similar to Aristo in style). Some watchmaking has remained in the region, but it's not nearly what was there prior to WWII, or after the Japanese quartz onslaught. German mechanical movement and watchmaking didn't survive nearly as well as the Swiss did. There has been some growth in recent years, but it's been very slow. Aristo's main products for some years now have been aviation and aviation related watches, with some maritime, u-boat and marine watches. In addition, they currently offer several models in the style of vintage auto gauges, and some general military field watches. They're generally the contemporary standard to larger men's sizes (standard to large for watch brands other than Android or Invicta). The company owner also has a penchant for thin dress watches, creating his 7001 models in 2003. These didn't last more than a couple years in their collection, perhaps because dress watches of their size were so different from the Aristo norm. It was followed by a similar, slightly larger line and Aristo has quietly expanded their Classic and Bauhaus offerings paying homage to their 1920's-1930's Weimar Era, and their 1950's-1960's pre-quartz past. 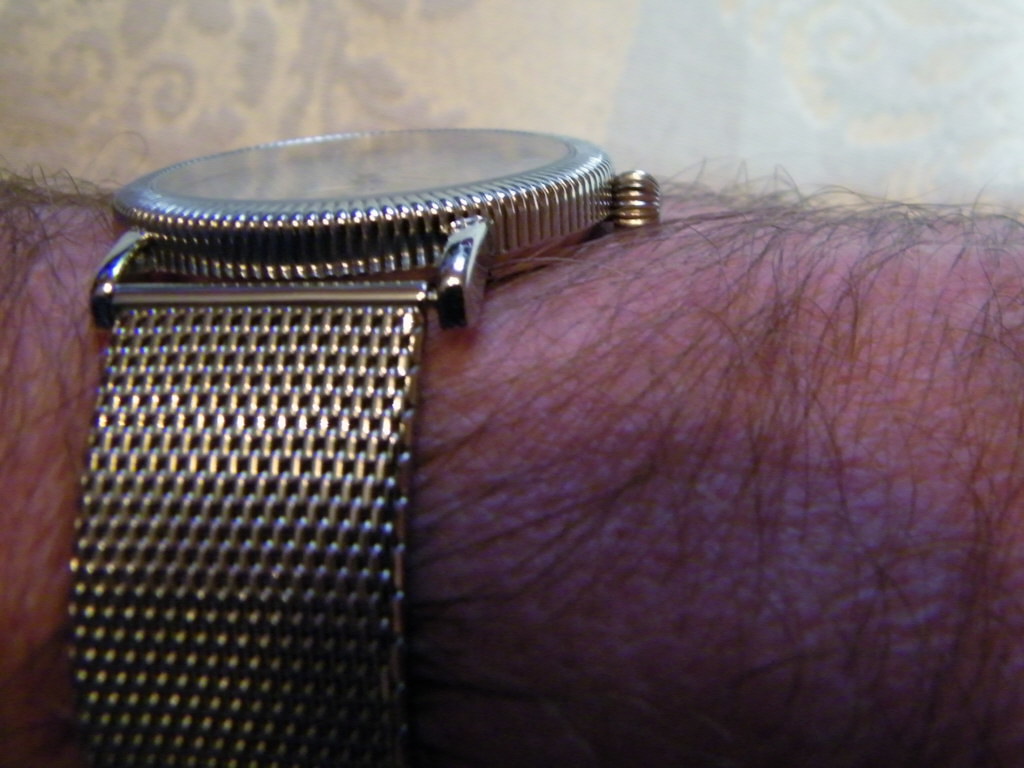 The ETA 7001 movement was designed by Peseux and put into production in 1971. Peseux was folded into ETA during the huge collapse and consolidation of Swiss movement and watch companies in the 1980's as the Japanese quartz Juggernaut nearly wiped them out. Their 7001 is one of the movements to survive the drastic reduction in watch movement calibers, no doubt due to its unique 2.5mm thinness in a mid-size 10.5''' (23.3mm) diameter. Compare that to the 3.6mm, 11.5''' (25.6mm) ETA 2892A2, or the even thicker 4.6mm ETA 2824-2. One can argue that at 2.5mm, it's the thinnest standard mechanical caliber in current production available to watch makers (assemblage brands buying ebauches and whole movements versus manufactures making in-house movements).

(Updated July 2020)
There are thinner mechanical watches and movements, but the movements are in-house and proprietary (i.e. not available to other watch companies). The current record holder I'm aware of (as of July 2020) is Piaget's manual wind Altiplano Ultimate Concept Watch at a mere 2mm thick. Price is only available on request by serious buyers. (Hint: If you have to ask, you can't afford it.) Their 3.65mm Altiplano Ultimate Manual Wind is $32,500. Bulgari keeps challenging them and time will tell if they can get beat Piaget's 2mm. The rest of us mortal proletarians will have to settle for 4mm thicker watches like this 6mm Aristo, which boasts a seconds hand Piaget (and others) jettison in creating their thinner movements. As thick as it is by comparison, I haven't met a shirt cuff yet this Aristo won't fit under! 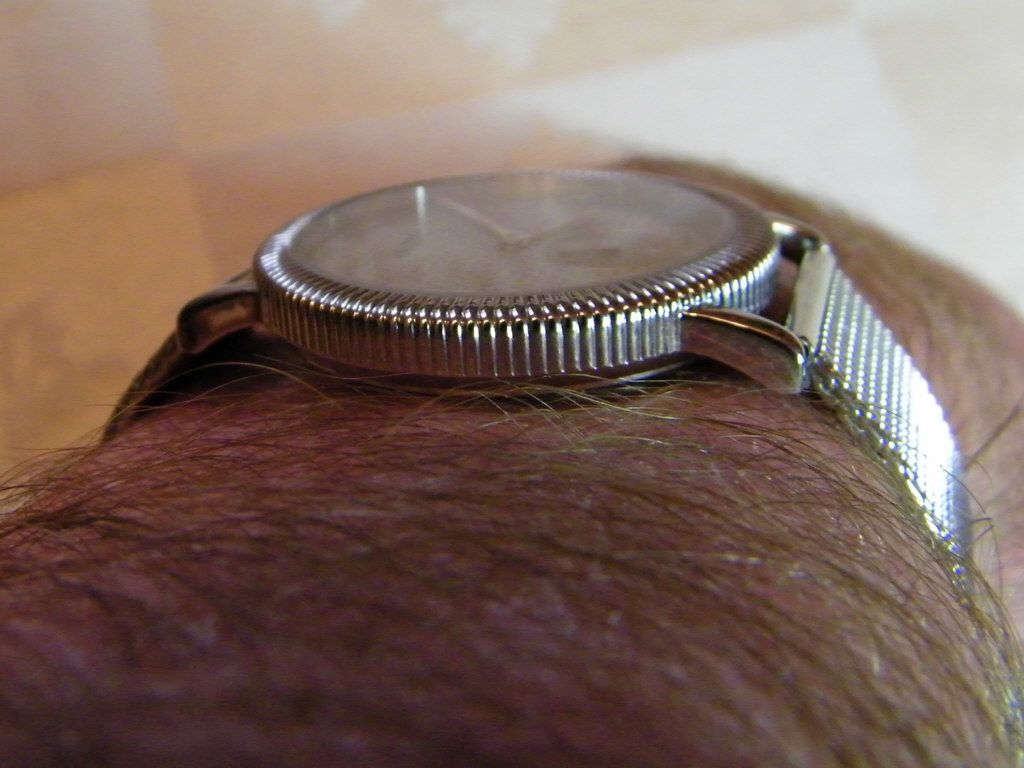 The 1.5mm thick Vollmer Milanese band is a good match-up for the thin watch head. It works well aesthetically with the shorter lugs, without the unduly large and unsightly gap watch heads with longer lugs create when straight end bands are put on them. The crown is also proportional to the watch head and its onion style shape provides a good grip for winding and time setting in spite of its smaller size. The coin edge bezel matches the crown knurling and Milanese band. It's a combination of function and harmonious aesthetic that shows thoughtfulness in the complete design. 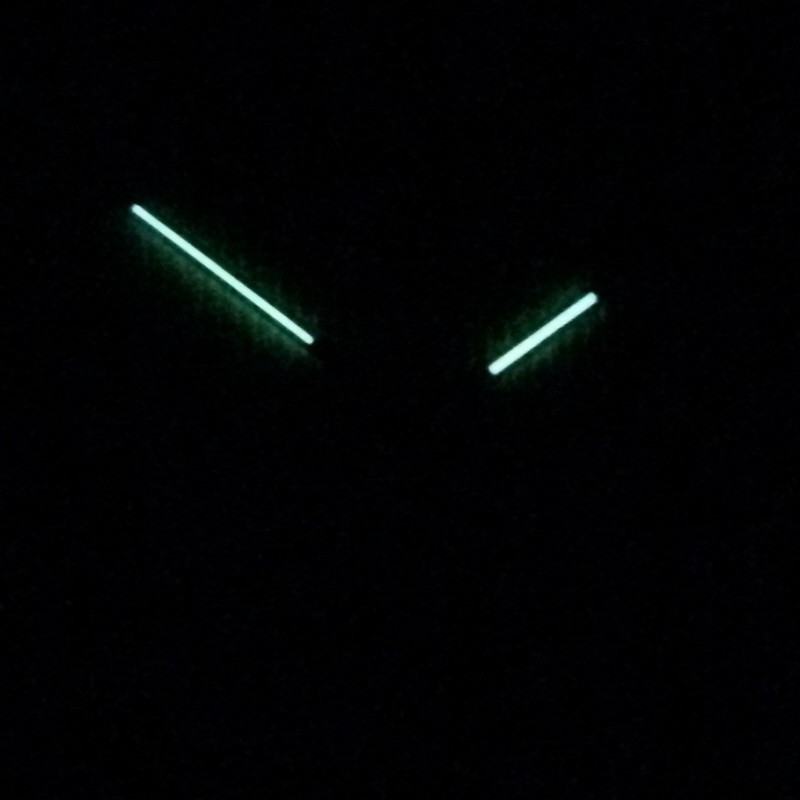 In spite of their narrow width, Aristo put some lume down the center of the bayonet hour and minute hands. It's only about 1/3rd their width, but it shows up quite brightly. It's not a Seiko Monster beacon, but it does glow sufficiently for a while in dim lighting. One might wonder why no lume around the hour indices. A lume dot large enough to make it reasonably visible would clutter the dial. I've not had a problem discerning the hour and approximate minutes without hour index lume (the time above is approximately 1:50). 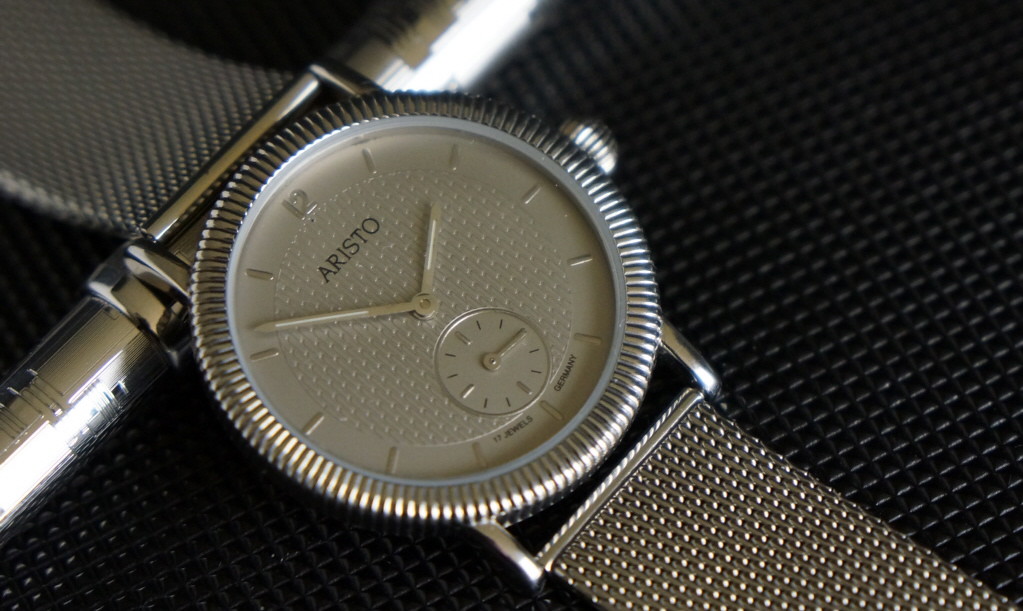 Most ultra-thin watches suffer from a two dimensional appearance, as if they were printed onto a strip of plastic, mylar or paper. It starts with plain flat enamel dials with ultra-narrow flat stick hands, and continues with smooth flat bezels surrounding them. The strap is typically very thin and flat with no texture. Their stark plainness is not very interesting visually. The Aristo has a textured, coarse basket weave dial, very slightly raised hour indices, along with a raised ring around the seconds sub-dial and around the inner dial separating the basket weave from the hour indices. The combination of dial textures, coin edge bezel and onion crown with the Milanese band give it visual interest and depth, in spite of its extreme thinness, and their subtlety maintains a simplicity of style. 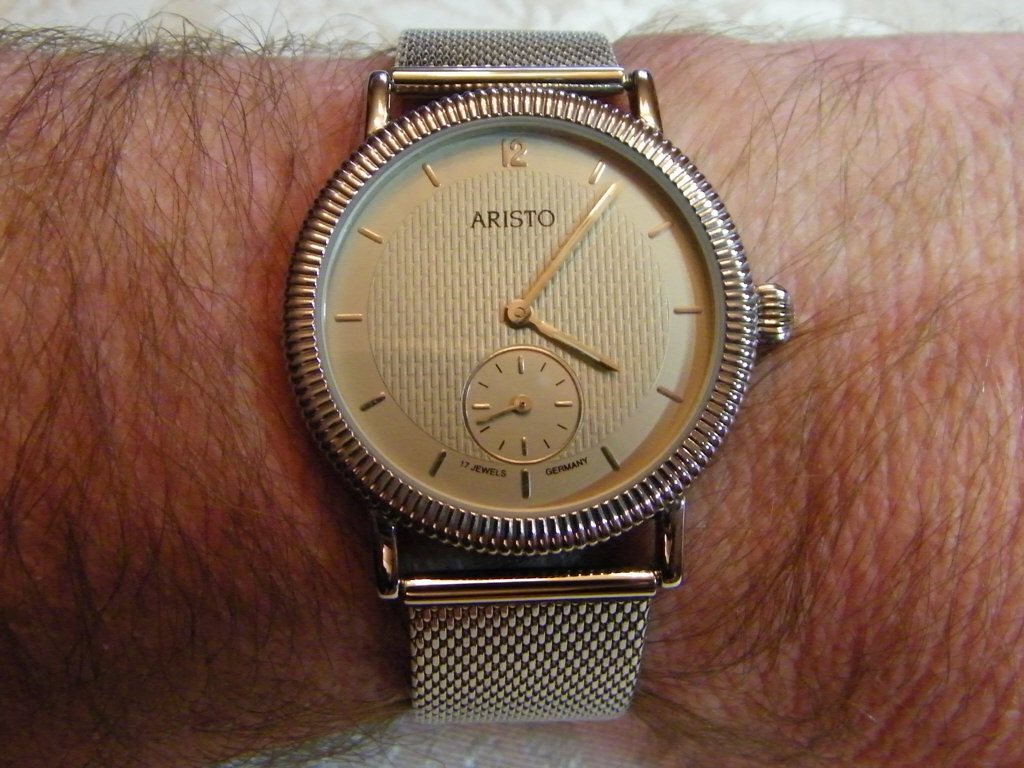 There are formal and semi-formal occasions when the large sports or tool watch isn't an appropriate match for the attire. A smaller, thinner and less conspicuous dress watch is called for. It's why I have a few formal watches. This Aristo is one of them.

Note:
I have no affiliation, association or financial interest with Aristo, or its sister company Vollmer, or any of their distributors or dealers.
- January 31, 2016