A Lesson Repeated:
Do Not Use a 10x Loupe to Examine *VPMWs
*VPMW: Very Poor Man's Watch; sub-$100 street price
This Rousseau Cantata was loaned to me specifically for review by Ricky, an acquaintance on PMWF, the "Poor Man's Watch Forum" which is dedicated to sub-$1,000 watches. Summary:
Specifications:
Rousseau is one of over a dozen brand names marketed in the U.S. by Always at Market in Carrollton, Texas. They're sold exclusively through auction sites, primarily eBay now, and are advertised with absurdly high suggested retail prices. Invariably, most are sold for what they're actually worth in the $50 to $100 range (for those without real precious gems on the dial or case), although there are anomalous auctions. Bidder behavior is utterly inexplicable at times. One exception is their "Balmer" brand which is a little more up-market from the rest (Balmer uses Swiss movements, but they're not ETA and less expensive). In the industry they're referred to as "Myth Brands" (with elaborate tales about the company name originating from an obscure, centuries-old, Swiss watch or clock-making family) or "Mushroom Brands" (pop up overnight and disappear shortly thereafter). They're typically "Private Label" made in China regardless of where the company headquarters is located. One of the firms that makes many of them is MillionSmart Enterprise at a factory in Shenzhen. Most have Chinese Tianjin Sea-Gull (one of the better Chinese movement makers) or Hangzhou movements. I don't know much about the Hangzhou except they make some of the ETA 2824, 6497 and 6498 "clones." 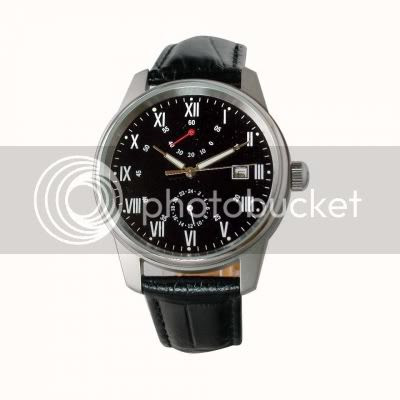 A visit to the Rousseau web site is no different than other "Myth Brands." Its "history" tells a quite lengthy tale about an exceptionally obscure 17th Century European watch-maker named Jean Rousseau and his sons, the eldest of which lived into the mid-18th Century. It ends its verbose meanderings there, as if the family suddenly vaporized with Jean's sons. Absolutely zero connection is drawn between that family and the current brand name, or the age of the current Rousseau brand. So much for European lineage and heritage. There isn't any.

It has the MillionSmart "private label" heritage common of many "Myth Brands." The evidence is quite compelling after visiting the Chinese web site for MillionSmart Enterprise, perusing their extensive on-line catalog, and finding this MillionSmart brand MS70020 that looks nearly identical. Change the dial slightly, put on different hands, and add a Rousseau logo. The movement inside the MillionSmart MS70020 is identical: Tianjin caliber TY-2856 made by Sea-Gull.

Case, crown and crystals:
The case is highly polished solid stainless steel in a clean "All Dial" style with no bezel which makes its 40mm diameter appear visually larger. Very well made with clean lines. One sees the dial, not the case. Crown is also stainless steel with good fluting and decent size to grab hold of and operate. It's not a screw-down crown, a feature that should not be expected of a Dress Watch. The crystals top and bottom are mineral glass, clean, and appear dead flat. Execution of all this gets an excellent mark. 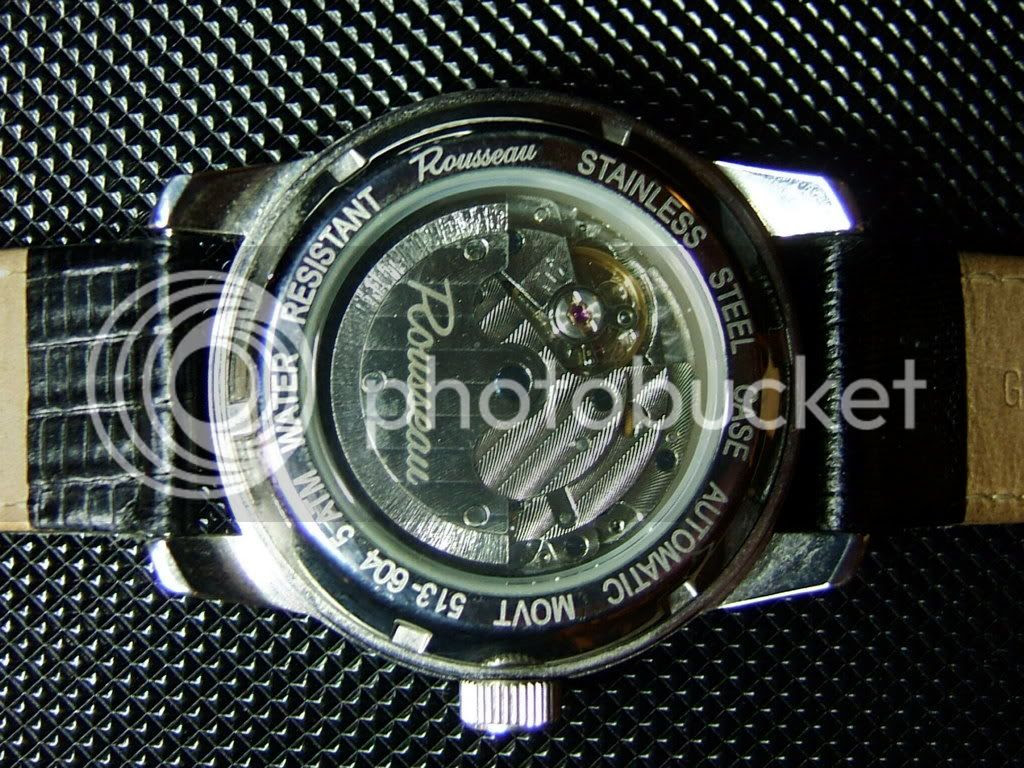 The rim around the see-through case back is etched with markings one expects to find on the back of a watch. Close examination shows that these markings are not etched into the steel using "bead" or sand blasting, or by a chemical photo-mask process. They're made by either mechanically needle peening or, more likely, by pulsing LASER. It requires using a loupe to see the tell-tale "plowed field" rows that multiple passes make using these kinds of etching processes to attain the font width. Nevertheless, lettering edges on the back are sharp and it's very legible. More about the rotor when the movement itself is discussed.

Dial and Hands:
Dial is well sculpted with flat, wide outer ring in black surrounding a white checkerboard inner circle. 24-hour subdial at "6" has fine concentric circle pattern, and 40-hour power reserve partial subdial has a fan pattern. Hour indices are roman, not uncommon for a Dress Watch. An outer chaptering has hour dots with minute indices. An inner chapter ring around the white circle has minutes marked in arabic numerals every five minutes. An unusual convex cyclops magnifier is over the date window on the dial itself. Usually these magnifiers are on the crystal, not the dial! The silver hour indices and "Rousseau" script logo are very cleanly applied and straight. All other markings are inked (appear to be pad printed) with very clean edges. The central dauphin Hour, minute, and second hands are all black, as is the stick 24-hour hand. The power reserve hand is red, matching its sub-dial markings. Neither the dial nor the hands have any lume, which is not expected on a true Dress Watch.

While the dial has an overall aesthetic appearance, some ergonomics are lacking. The tips of the black minute and second hands are lost over the flat black wide outer ring making precise minutes and seconds more difficult to read. The date complication is nearly worthless in practical use as its window and numbers on the date ring are so tiny. The cyclops magnifier on the dial does nothing to improve this. Indeed, it may impede reading the date.

Dial workmanship overall is excellent with two exceptions. The first is relatively minor. Look at the photo above at the black/white edge between the "35" and "40" minute markings on the inner chapter ring. The dial was first painted black, and then the white inner portion painted over it. The boundary edge between has a few places where the white paint bled slightly down into a groove that surrounds the checkerboard pattern. It wouldn't be noticeable if it weren't for the stark contrast of white and black. The second problem is a major quality spill that escaped all the Quality Controls (what there may be of them) from dial fabrication through watch assembly. Have you spotted it yet? Very carefully count the roman hour indices around the dial and examine each one. When you get to the "VI" the next should be a "VII" but it's not. There are two "VI" indices. The missing "I" didn't fall off or it would be floating around inside the watch and the glue dots that had held it would be visible. I'm left wondering how many of these dials got out the door!

Strap:
The black strap is very good quality crocodile grain leather and is padded on the inside. Stitching looks good, and it has an excellent signed buckle made of heavy guage stainless steel with rounded edges on all its parts. Well executed and an appropriate color for the watch style. 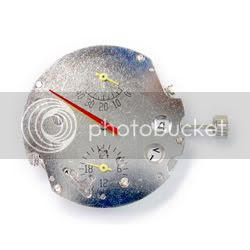 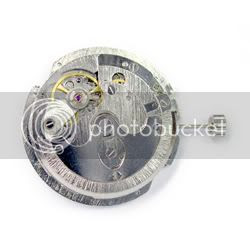 The movement is an inexpensive, ~13''', 21 jewel, 21,600 bph Chinese made Tianjin Sea-Gull Series ST-16N caliber 6180 automatic, also known as a caliber TY-2856. Features include hand-winding and hacking, with date, 24-hour subdial, and power reserve complications. The photos above show a bare 6180 without any decoration. The Rousseau's bridges and rotor are decorated with "Geneva Stripes" and the screws visible from the back are blued. As should be expected, the stripes line up properly across bridges. 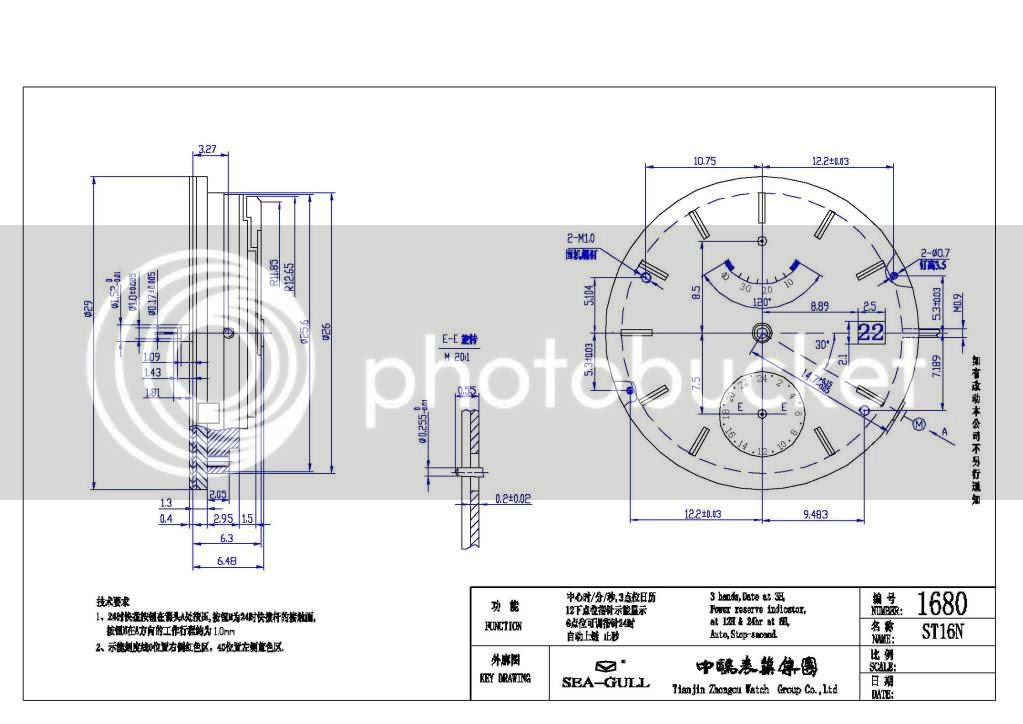 The Tianjin Sea-Gull ST16N 1680 is based on the Miyota simplified bridge movement, but slightly larger. Basic dimensions are ~13''' (29mm) diameter and 6.52mm height. It is held inside the case with a nylon spacer ring. The central minute, hour and second hands pinions are 100/152/17 (m/h/s in 1/100ths millimeter; defines hand mounting hole diameters). Both subdial hands appear to have 25.5 pinions (in 1/100ths millimeter).

I looked at the movement using a 10x loupe to examine its workmanship as the decorations are particularly pleasing to the unaided eye. The first thing I noticed was ability to see the pallet stones on the pallet lever being driven back and forth by the escape wheel. The ruby pallet stones, from the side I could see, looked clean and well mounted to the pallet lever without any lint or other debris. Likewise, the balance wheel and hairspring and regulating lever also looked very clean and well made. As of today, and with my crude accuracy measurement methods, it's gaining ~13-14 seconds per day which is something a watchmaker could easily tweak and improve to about half that.

Next came an examination of the extensive decoration on the bridges and rotor. See the photo of the watch back above. Even without a loupe a smudged fingerprint can be seen on the rotor. A look at the engraved Rousseau signature on the rotor revealed it could have been done better as it needed to be deeper to overcome the Geneva striping already present. As a result, it looks rough compared to the etched printing on the case back performed using the same process. The bluing on the screws is decently done and they are beveled around their rim, but not inside the slot edges. The Geneva stripes are likewise done fairly well and they're even width and straight. This type of decoration is performed with a horizontal cylinder and should form a concave surface with curved grooves. I found the stripes very slightly lifted on one edge compared to the other (this is very difficult to see; requires looking at a bridge edge). In addition, the corners on the bridge edges are slightly radiused, but are not finished off after the striping as would be done by hand with extremely expensive luxury watch movements (and wouldn't expect this either). For all the nice decoration though, I could see small nicks, scratches and scrapes in the striping through the loupe, along with a few bits of exceptionally fine dust scattered about (about the diameter of powdered sugar). While none of this affects movement operation one iota, it's evidence that parts and tool handling during movement assembly is sloppy. In addition, parts, movement assembly and storage isn't in a dust-free environment. While the Chinese have made progress, they have some distance to go with controlling their manufacturing. I had to continuously remind myself that this is a very inexpensive movement compared to Swiss ETA and Sellita, or the Japanese Seiko and Orient movements.

Movement operation is smooth. Winding feels much like a Miyota 82xx series movement with an extremely fine "click" (this is a toothed wheel and spring that acts as a ratchet). Detents are positive with setting date and time, and the second hand does not have the "jump" that some Chinese movements suffer when the crown is pushed back in following time setting (the "jump" is usually caused by the hack stopping the 3rd wheel instead of the balance wheel). The 24-hour hand is incremented by using a flush pusher located on the side of the case at the "4." It has a dimple in the middle of the pusher and it's intuitively obvious one should use a pen or pencil to increment the 24-hour time. It's an interesting feature that reminds me flush pushers found on quartz digital watches for setting time and calendar date. 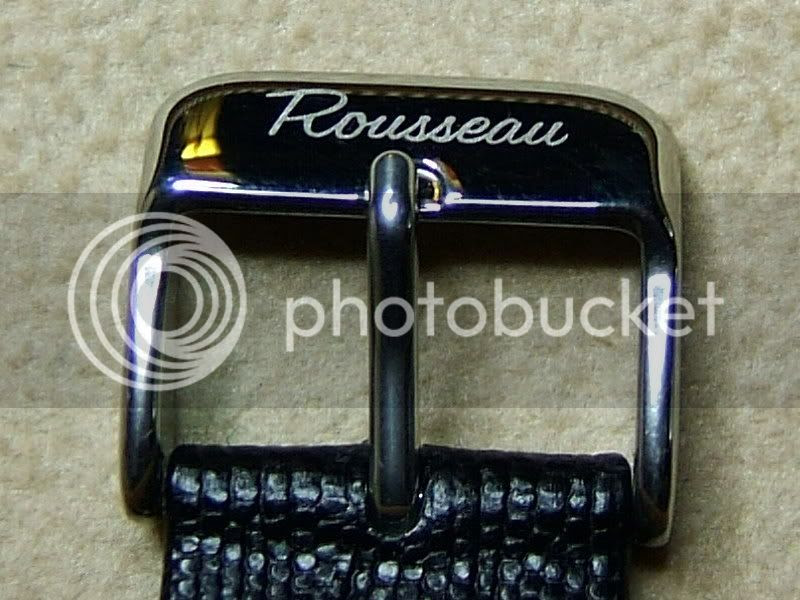 Although it's not particuarly my kind of watch style in terms of colors, Roman hour indices and leather band (my preference is steel bracelet), I could live with the movement and overall workmanship, with a simple rule . . . don't look at it using a 10x loupe . . . as a sub-$100 watch . . . except for one thing . . . the twice each day hour of Daylight Savings Time that occurs at 7:00 AM and 7:00 PM (the "missing" Roman "I" at the "7" hour) . . . a major gaffe in Quality Control starting with the dial fabrication and continuing through sending a completed watch out the door. It's something I would expect Rousseau to fix (aka Always At Market in Carrollton, TX), without question or cost, regardless of how little I paid for the watch.

Rousseau Watches Web Site
Always At Market Web Site
Note: I have no affiliation, association or financial interest in Rousseau or Always At Market. I do have an association with Ricky, who owns this watch, and was kind enough to send it to me for review.
- April 05, 2009