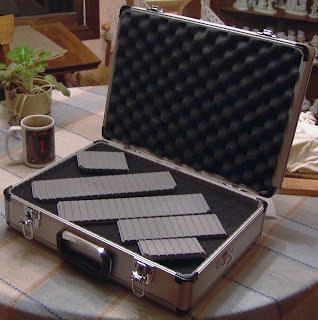 Lowe's home improvement store sells a sturdy tool case with a perforated foam insert that can be easily cut to the outline of tools or instruments to hold and pad them. It's quite inexpensive, especially compared to comparable brand name cases made by major tool and instrument case makers. It also comes with a handful of thinly padded dividers that can be used to create major compartments, and there are slots for them along the outer edge inside the case, and along the sides of each divider. The lid is has a solid piece of egg crate foam to keep tools or instruments from rattling around. Under it is a stiff hardboard with pockets for hand tools, much like pockets found in the top part of brief cases. Might be useful for some, but it's a pain to access as the egg crate foam must be pulled out to get to it. These cases have been popular among the "underground" of wristwatch collectors to hold between a dozen and two dozen watches for transporting wristwatches to gatherings of watch collectors. I've had one of these cases for over a year now. The outer case shell is well made and very sturdy.

The usual manner of setting up the inside is by carving out small blocks of foam in a grid to make pockets into which watches can be placed, and using the blocks that were cut out as "pillows" around which to wrap the watch. Sometimes the two longest dividers included with the case will be used to provide some stability to the large grid of pockets. I drew a grid in Excel to plan the pockets for mine when I first got it. Three rows of six pockets that could hold eighteen watches. Notice the extra space between the second and third columns, and between the fourth and fifth columns. The long dividers were used between these colums to add structural strength and stability to the foam 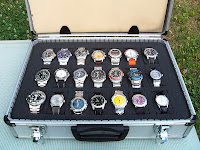 grid. Looked for, but didn't find a photo of mine as it was originally set up. The photo on the right shows one that's used by a watch forum acquaintance of mine, Colby. He managed to get twenty-one watches in compared to my eighteen by using a slightly different grid configuration and omitting the two long dividers. Otherwise, the setup, filled with watches looked nearly identical to his.

The perforated foam it comes with works well except for two problems. When loading up the case with watches for travel, they must be transferred from the pillows they're normally stored on in dresser top watch boxes onto the makeshift pillows in the Lowe's case. With continued use, wear and tear on both the foam "pillows" and the foam grid eventually starts to break the foam apart (along its perforations). I've wanted to make my own padded dividers spaced in a manner similar to dresser top watch boxes that would allow using the pillows on which my watches are normally stored in them. Hopefully it would allow more watches in the case, either twenty-one or twenty-four. At the least it would make loading up the case faster and solve the foam durability problem. This is the saga of my Lowe's Tool Case conversion for transporting watches.